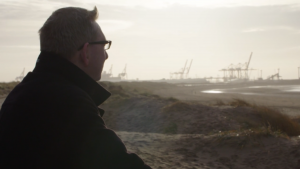 We spent the day filming in Liverpool with Len McCluskey, Unite’s general secretary. Working class heroes like Len were shaped by their background by their stories. Len was a child of the 1960’s when revolution was in the air. This short film offers an insight into the real Len, and his journey from dock worker to general secretary of one of the largest trade unions in the country.

In our film, Len reflects on his humble background,  brought up in a poor neighbourhood in the backstreets of Liverpool in a two-up two-down. There were lots of jobs back then.  Len chose to work on the docks. On his first day, he was told, ‘you join the union here, son’. The docks were alive and vibrant and this is where Len’s politics took shape. These were the beginning of his ascent to union leader, representing the interests of 1.42 million members.